By buying a property at the Satori Residences, you can live near schools, malls, hospitals, restaurants, commercial centers, government offices and other places of interest.  When choosing a condominium to buy, you must be taking location into consideration.  The place must be accessible to these places so that you and your loved ones do not have to commute too long or drive and deal with traffic for too much time before getting into their places of work, study, business and other tasks.

When it comes to shopping malls, the site is also close to some of them.  These include the Tiendesitas, Estancia Mall, SM Megamall, Ayala Malls The 30th, SM Center Pasig, Metrowalk, SM City East Ortigas and Silver City Auto Mall.

Pasig is a highly urbanized city in the National Capital Region.  It is about 12 km east section of Manila and is bordered by Marikina and Quezon City on the North. On the West, Pasig is bordered by another progressive city, Mandaluyong. On the east, Rizal borders it, and Pateros and Taguig City on its south. This city has a highly developed transportation system. There are many ways to reach this town, such as a cab and jeepneys.

You can go to different places in this city where heritage and culture are teeming. In addition, you can take the bus on EDSA, going either southbound or northbound.  The buses can stop at Robinsons Galleria, a mall in the city. You can also take the Metro Rail Transit, which stops at the Ortigas Station from where Robinsons is a few minutes away.

The city’s western section is where many of the businesses and financial resources are located, and these include warehouses, factories, commercial facilities and business establishments. Pasig is also known for the plentiful of commercial and real estate developments. One of the most iconic real estate properties located here is the Satori Residences, a DMCI masterpiece.

The Ortigas Center, which is one of the leading business districts in the Philippines, is in Pasig. This place is teeming with residential condominiums, office buildings, malls, schools and commercial establishments. A few of the most prominent structures in the location include the University of Asia and the Pacific and the Integrated Bar of the Philippines. Asia’s largest beer producer, San Miguel, is also in Pasig City. 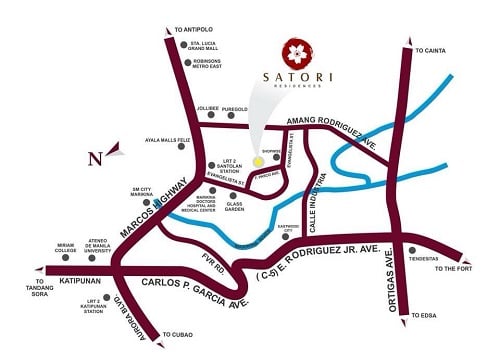